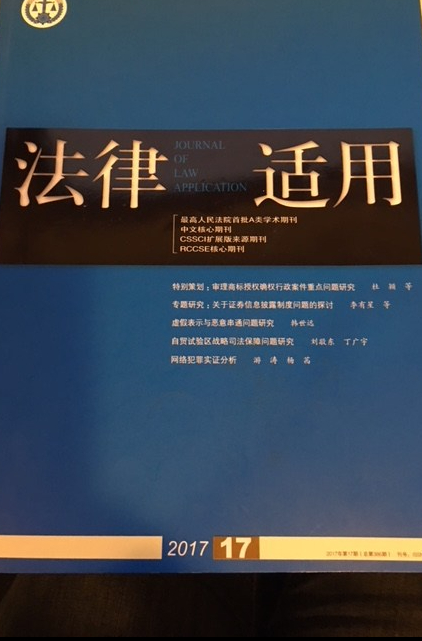 A team of researchers from the Jiangsu Higher People’s Court #1 Civil Division recently published an article on difficult legal issues relating to public-private partnerships (literally government/social capital cooperation) (PPP) in the Journal of Law Application (the Journal) (法律适用), # 17, 2017.  The Journal is one of China’s core legal journals (among the most prestigious academic law journals).  The National Judges College is affiliated with the Supreme People’s Court (SPC).

The data on which the researchers’ analysis was based was the results of a search of the official Supreme People’s Court (SPC) database (裁判文书网),  using the keywords  “BOT” and  “PPP”.   Their search (end date April 30, 2017) found 493 BOT-related decisions and 20 PPP-related decisions.  The article relates to both BOT and PPP projects and uses the term PPP to include both.

Wide range of industries are involved in PPP disputes

Civil cases mainly include contract, property, tort and financial disputes, among which contract disputes account for 78.22%.

Because PPP is a newly-developing area, many problems are gradually emerging. New problems will continue to increase, including interpretation of the PPP contract terms, the application of the “changed circumstances” doctrine [under the Contract Law], the government’s repurchasing issue,  and the evaluation of project quality. In December 2016, National Development and Reform Commission (NDRC) and China Securities Regulatory Commission (CSRC) released Notice of the Ministry of Finance, the People’s Bank of China, and the China Securities Regulatory Commission on Issues concerning Regulating the Asset Securitization of Public-Private-Partnership Projects, which however, still cannot solve some key legal issues such as asset independence and bankruptcy isolation in terms of the insufficient SPV legislation.

For a long time, the government has been used to the role of “administrator”, usually solving disputes through administrative mechanisms. It has not cared much about contracts in which it is on an equal footing with private entities. Facing PPP disputes, private entities may take irrational and non-legal means to protect their rights, resulting in further aggravated conflicts and sometimes mass incidents.

There are difficulties hearing PPP cases, considering the insufficient (PPP 立法供给不足), non-specific (没有专门的PPP法律和行政法规) and incoherent legislation (没有明确的法律规则参考). Also, courts need to consider many aspects such as the legal, economic and social impacts.

Although the central and local governments are promoting PPP projects, there is virtually no related legislation. Although there are relatively few PPP disputes now, that will change as government continues to promote PPP.   Because legislation governing PPP projects is insufficient the compliance risk is inevitable.  Major legislation lacks special provisions regulating PPP:

Although the State Council has enacted guidelines on promoting PPP projects (Circular of the General Office of the State Council on Guiding Opinions on Promoting the Public-Private Partnership Mode in the Public Service Fields (关于在公共服务领域推广政府和社会资本合作模式指导意见)  they are only administrative regulations and are insufficient to protect the private sector. Meanwhile, there are conflicting policies from different national ministries and departments, which in the end not only affects the standing of PPPs and fairness, also causes high administrative costs and low work efficiency.  It is unclear what PPP is and the relationship between PPP projects and others, such concessions. Therefore there are many disagreements concerning whether a project should be considered a PPP project and what the rights of the various parties should be.

The competent authority & management mechanism for PPPs are  unclear

At present, China lacks a unified institution to govern PPP projects.  Although the state has designated the NDRC to take the lead on traditional basic infrastructure PPP projects and the Ministry of Finance (MOF) to take the lead on public services PPP projects, in reality there is crossover between the two types of projects and no clear line between them.  These projects involve  NDRC, MOF, and the authorities in charge of the relevant industry and in this situation with projects involving multiple approvals, there are no clear rules on the division of authority among authorities, and between the central and local authorities, the procedure for obtaining approvals, and whether approvals can be consolidated.

PPP projects involve multiple legal fields such as tax, land, finance, insurance, and construction.  Because a coherent and detailed procedure is lacking for PPP projects, it will lead to legal risks afterwards such as whether PPP projects have tax breaks, whether the land used in a PPP project needs to be put out for bidding separately.

III. How the courts deal with PPP cases

There are two schools of thought on the nature of PPP agreements, administrative v. civil agreements.

Validity of the PPP contract?

What if the parties argue that the PPP agreement is invalid since it may violate existing laws and administrative regulations?

Many PPP projects are connected with land use. What if the land was not subject to a tendering process? Will that invalidate the PPP agreement?

Authors’ view: this is controversial in practice. According to the regulation enacted by Ministry of Land and Resources 国土资源部办公厅关于印发《产业用地政策实施工作指引》的通知国土资源部办公厅关于印发《产业用地政策实施工作指引》的通知, if the PPP project concerns land use, then the process of bidding and the process of authorizing land use can be combined, therefore the courts can confirm the validity of the PPP agreement.

Some local governments will make undertakings to provide certain benefits or rewards to the private sector participants. What is the legal effect of that commitment?

Authors’ view: we need to distinguish different situations. If the government’s benefits or rewards are in violation of law, administrative regulations and mandatory regulations, such as in violation of tax laws or result in the loss of state-owned assets, then the undertaking is invalid. If the commitment does not violate mandatory laws or against the public interest, such commitment should be valid based on the principle of estoppel.

pledge of the interest in the PPP

Can a concessionaire’s rights be pledged? Considering the SPC’s guiding case No.53, the usufruct (benefits from the use rights) in a concession may be pledged and can be used as accounts receivable in the pledge registration

Many thanks to my Peking University School of Transnational Law research assistant Zhu Dianmeng (Grace) for her work on this.