On the afternoon of 21 August, Professor Liu Jingdong of the International Law Institute of the Chinese Academy of Sciences (pictured below) and I spoke at the SPC, invited by the #4 Civil Division.  Ms. Long Fei, Deputy Director (Person in Charge) of the CICC Coordination and Guidance Office. chaired the proceedings and Judge Wang Shumei, head of the #4 Civil Division, gave concluding remarks.  Professor Liu had previously been a guazhi scholar (seconded/temporarily assigned) in the #4 Civil Division (appointed as a deputy division chief, as is the practice). He felt the event was a reunion with his former colleagues.  This was the first event to involve lectures by CICC Expert Committee members to judges and other staff at the SPC, including several members of the CICC.  I trust that other Expert Committee members will have the same opportunity in the future.  I am grateful to all those involved in making all the arrangements needed for the event to take place and to all of those who took time away from dealing with difficult cases and other work to listen to and interact with Professor Liu and me.

The audience of about 40 people (pictured below) included Hu Shihao, head of the Judicial Reform Office, Li Xiao, deputy director of the Research Office, Judge Guo Zaiyu (of the CICC), and many others, including a group of students interning in the #4 Civil Division (seated in the back row).  After the formal part of the lecture (and a question and answer session), I was very happy to be able to take a few minutes to share with the students some of my thoughts about takeaways from their internships.

I spoke about the impact of the Belt and Road on the Chinese courts (about which I have previously spoken), market reaction outside of China to the CICC, and some modest suggestions relating to the Expert Committee.  I gave my presentation in Chinese, as I knew some in the audience would have difficulty understanding English, although my “foreigner’s Chinese” (洋式中文) may have been a challenge to understand. Professor Liu spoke on the “legalization” of the Belt & Road”  (the subject of his 2017 article in 政法论坛). One of my suggestions was that this not be a one-off event. The official report on the event (in People’s Court Daily), is also on the Chinese version of the CICC website. 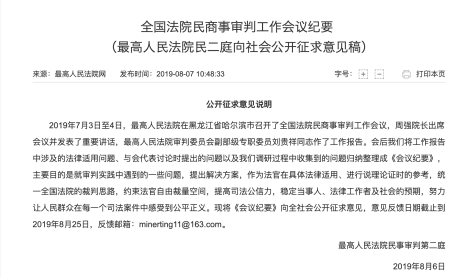 Screenshot of the explanation accompanying the draft conference summary

In early August, the Supreme People’s Court (SPC) issued the National Civil Commercial Trial Work Conference Conference Summary (Draft of the SPC #2 Civil Division for the Solicitation of Opinions from the Public) 全国法院民商事审判工作会议纪要 (最高人民法院民二庭向社会公开征求意见稿. The draft, which sets a comment deadline of 25 August and includes a brief (but useful) introduction, provides a summary of current critical legal issues in domestic commercial law. As explained below, this document provides an excellent example of one of the ways that the SPC guides the lower courts through issuing judicial normative documents 司法文件 or 司法规范性文件 (also called judicial regulatory documents and judicial guidance documents (司法指导性文件) and uses national court conferences to derive a consensus on critical legal issues. The 123-article draft document relates to legal issues, rather than the political issues discussed at length in Justice Liu Guixiang’s speech (as described in a recent blogpost). The fact that this draft was issued for public comment and so quickly shows that guidance from the SPC to the lower courts is needed quickly at a time where the domestic Chinese economy is facing downward economic pressure.  I  explain what this document is, why it was issued for public comment, and its implications. The planned summary of the issues will need to wait until time permits (perfect is the enemy of the good).

Collection of Guidance Documents of the SPC

It is a fact that the Supreme People’s Court (SPC) issues a broad range of documents that guide the lower courts in addition to its judicial interpretations.  Several recent posts on this blog (and two of my recent book chapters) have focused on several of those documents. One of the documents that the SPC issues is entitled “conference summary/meeting minutes” (会议纪要), which is also a type of Party/government document (as mentioned in earlier blogposts).

As I explained “earlier” (25 years ago) in my 1993 article, the SPC uses specialized court conferences as a way of transmitting central legal policy, unify or harmonize court practices in accordance with that policy, and obtain an overview of court practices and problems.  Although conference summaries do not have the status of a judicial interpretation, the lower courts will generally decide cases according to its provisions. “Harmonizing court practice” means in Chinese judicial parlance that judges are applying the law similarly.

The SPC entitles conference summaries “judicial normative documents”（司法文件) judicial guidance documents (司法指导性文件) and sometimes judicial policy documents” (司法政策性文件).  As I’ve written before, this fuzzy use of terminology is not unusual. An (authoritative) follower has proposed using the English translation “judicial regulatory document” for 司法规范性文件.  An authoritative person (who cannot be named), concurred with the follower’s proposal. The book pictured above, edited by a group from the People’s Court Press (affiliated with the SPC),  includes a number of conference summaries (some with commentary by drafters). The editors commented that “although judicial guidance documents are not judicial interpretations and cannot be cited in a court judgment document as the basis of a judgment, it is generally recognized that they have an important guiding impact on the trial and enforcement work of the courts at every level.”

In the introduction to the draft, the SPC described its purpose in issuing this conference summary.  “The main purpose is in relation to various problems encountered in the process of trial practice, to provide some resolution methods that judges can use as a reference when discussing reasoning in the application of specific laws, to unify judicial thinking, and limit judicial discretion, work hard to have the masses feel justice in every case”   (主要目的是就审判实践中遇到的一些问题，提出解决方案，作为法官在具体法律适用、进行说理论证时的参考，统一全国法院的裁判思路，约束法官自由裁量空间，提高司法公信力，稳定当事人、法律工作者及社会的预期，努力让人民群众在每一个司法案件中感受到公平正义).  The conference summary has implications for the legal professional community as a whole (particularly lawyers and in-house counsel) because it signals what approach the lower courts are likely to take to current controversial issues.

According to the notice, the drafters of the conference summary combined the legal issues set out in Justice Liu’s report with issues raised by delegates at the conference and issues derived during the process of preparing for the conference.  As described in the book chapters mentioned above (and in great detail in a book chapter stuck in the production pipeline), this is representative of judicial interpretation and judicial document drafting.

From the number of articles relating to specific issues, it is possible to see where the inadequacies in current legislation exist and where the courts lack consensus on important commercial law issues.  Since the draft was issued, Chinese law firms have published articles focusing on specific issues. Time does not permit me to explain its provisions now.

A brief notice appeared on the China International Commercial Court (CICC)’s websites on 9 August, announcing that the Office of the International Commercial Expert Committee (Expert Committee) of the Supreme People’s Court (SPC) (国际商事专家委员会办公室) had been renamed the Coordination and Guidance Office (协调指导办公室) for the CICC from 21st June 2019. The main duties of the Office are described as directing and coordinating construction, adjudication management and external exchange (负责指导协调国际商事法庭建设、审判管理、对外交流; 负责国际商事专家委员日常工作等) of the CICC, and also in charge of the routine work of members of the Expert Committee. I surmise that these functions are meant to convey that the office will not only support activities related to the Expert Committee but also be responsible for a variety of matters, such as coordinating the drafting of rules and the wide variety of administrative matters that go along with any administrative entity in China, particularly one that deals with foreigners. The notice also announced that from 23rd July 2019, Ms. Long Fei, who has a Ph.D. from China University of Political Science and Law, has been appointed as the Deputy Director (Person in Charge) of the Coordination and Guidance Office. She had formerly been the Director of Department of Guidance Service, Judicial Reform Office of the SPC. She brings to the new role many years of work on diversified dispute resolution related issues.