Happy Niu 🐂Year to all blog followers and readers! Best wishes to all for good health, success in work and study, and all else!

In recent weeks I have been focusing on several longer pieces of writing and am still in “focus mode.”

While most of the Supreme People’s Court  (SPC) has been taking a break, based on previous year’s reports, it is likely that the team of people working on drafting President Zhou Qiang’s speech to the National People’s Congress (NPC) are hard at work.  I surmise that they will draw on January’s Central Political-Legal annual work conference, where responsibilities for implementing this year’s major tasks were allocated, and guidance from President Xi was transmitted. At that time, the Party leadership heard work reports from the SPC’s (and Supreme People’s Procuratorate’s) Party Group, so it seems likely that the report to the NPC will draw on that report as well.

Among the content that I expect to be included in the report is:

We’ll see next month how accurate the above guesses are. In the meantime, additions or corrections are welcome. 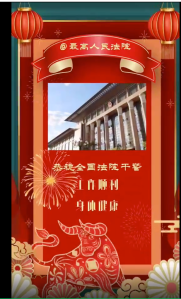 The SPC New Year’s greetings are ©the SPC, found in this short video