Commentary in People’s Court Daily had this to say:

Private entrepreneurs face hidden obstacles and difficulties, both from the legal system and in practice.  There are hidden inequalities in their legal status, particularly when they are facing monopoly [duopoly] state owned enterprises (SOEs), given huge power of the SOEs. Second, the investment environment for private companies is unstable. Government policies and measures often change, such as when government signs basic infrastructure contracts with private companies, but then government changes the related urban plan.  Third, private entrepreneurs in the past have failed to receive equal legal protection, because of judicial local protectionism and inconsistencies in judicial decision-making.

The Chinese government is promoting public private partnerships (PPP) but has not been able to attract substantial interest in the projects for a number of reasons, including regulatory risk. Private investors are also concerned that the local courts will not protect their rights in the event of a dispute.

Statistics released by the Chinese government earlier this fall reveal that overseas investment by Chinese private enterprise in 2015 surpassed investment by state-owned enterprises, accounting for 65% of outbound investment, with observers disagreeing on the extent to which it represents capital flight. The failure of private investors “to feel justice in every case” (linked to the lack of autonomy of Chinese courts hearing cases involving the rights of private entrepreneurs) will lead them to invest less in the Chinese economy, and diversify even more assets to jurisdictions more protective of private property interests.  Those other jurisdictions will benefit from an inflow of capital and entrepreneurial spirit.

On labor issues, the SPC has indicated what current government policy is and what the courts need to do to implement it. It is unclear whether these policies will be effective in reducing labor unrest. 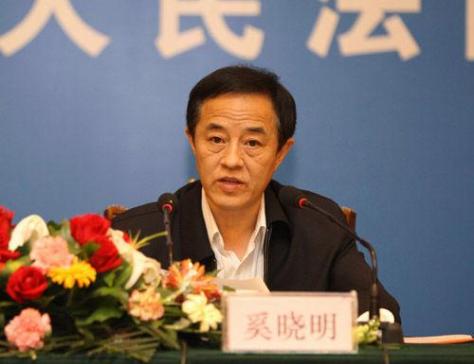 In the run up to the Sixth Plenum of the Central Committee of the Communist Party, which will focus on “intra-Party political life in the new situation,” the Supreme People’s Procuratorate (SPP) released further information concerning former Supreme People’s Court (SPC) Vice President Xi Xiaoming.  As this blog noted over one year ago, his case was transferred from the Party disciplinary authorities to the SPP for further investigation.  According to a recent report, The SPP has finished its investigation and has transferred Judge Xi’s case to the Second Branch Procuratorate of the Tianjin People’s Procuratorate.  The procuratorate has filed its case in the #2 Tianjin Intermediate People’s Court. The authorities apparently considered these institutions reliable,  because they had dealt with other sensitive cases earlier this year.

The charges against Xi include:  using his office and position to obtain benefits for others or using his authority and position to provide conditions [for obtaining benefits], and obtaining improper benefits through the acts of other state staff in the course of their work, illegally accepting huge amounts of money and assets.  The judgment to which the charges relate has been published.

The report repeated statements made about Judge Xi earlier by Meng Jianzhu, head of the Central Political Legal Committee, and SPC President Zhou Qiang.  In August, 2015, Meng said: “Xi Xiaoming has shamed the judiciary, as an experienced judge who has worked in the Supreme People’s Court for 33 years, who has colluded with certain  illegal lawyers, judicial brokers, and lawless business people by accepting huge bribes.” During his report to the NPC in March, 2016, Zhou Qiang said: “especially the effect of Xi Xiaoming’s case of violating law and discipline is terrible, has deep lessons” (尤其是奚晓明违纪违法案件影响恶劣、教训深刻). The report also mentioned that Judge Xi’s case has been used as a typical case by the Central Commission for Discipline Inspection.

Although the SPC and several other central criminal justice institutions have recently issued a policy document on making the criminal procedure system trial-centered, the first principle of which is “no person may be found guilty except by the lawful judgment of a people’s court,” Judge Xi’s case seems to be yet another instance in which the exigencies of the political system trump respect for the formalities of the operation of the criminal justice system.

Annually thousands of petitioners visit China’s courts, particularly the Supreme People’s Court (SPC) and its two circuit courts, to seek relief from injustices in the lower courts (and sometimes other injustices).

The #2 Circuit Court, located in Shenyang, Liaoning Province, has as one of its goals improving the way the courts in China’s northeast deal with cases in which ordinary people challenge government action, under the Administrative Litigation Law.  (Additionally, it hears a range of civil cases, as well.) The court is doing that through issuing a set of documents (to be analyzed in a future blogpost) and a research report.  (For those not familiar with what the SPC does, when the SPC looks into an issue, it often designates a research team to visit lower courts and review some of their files.) The chief judge of the #2 Circuit Court, Judge Hu Yunteng, and two colleagues looked into the question of why so many petitioners in Shenyang have grievances about administrative litigation in the lower courts.

According to the study, one-quarter of the 5000 petitioners whose visit was registered by the court in the first 11 months of 2015 complained about injustice in administrative cases, while those cases constituted only 2% of the overall caseload of the three northeastern provinces. According the study, most of the petitioners who visited the court were not registered.  From other statistics, a total of 33.000 visitors petitioned the court. In 2015, the #2 Circuit Court heard almost 200 administrative cases (accepted 193, closed 189, while in 2016, it accepted 691 administrative cases and closed 687). Who are these petitioners in these cases, why are they petitioning, and what should be done about it?

Who are the petitioners?

They often come repeatedly and in groups. They come in groups because of a group grievance, often relating back years and sometimes several decades. Why Liaoning? The court’s location in Shenyang means that it is more accessible to them, the province is more populous and has historically had more administrative cases. The peak of petitioning was in March, 2015 and is now has stabilized at a lower number.

The grievances are what the SPC (and the Communist Party) entitle “people’s livelihood,”–cases challenging government land requisition and compensation demolition of real property; administrative inaction, and release government information. Of those, 66% are related to land requisition, generally when the government requisitions land in old city and shantytowns.  The core reason, according to the judges’ analysis, is local government failure to comply with the law in the process, causing all sorts of administrative litigation and large numbers of petitioners.

Another reason for petitioning is that the rationale in court decisions in these administrative cases is inadequate or totally unclear, with overly simple descriptions of the facts.  The decisions often do not make sense; the result is sometimes correct but the reasoning entirely  wrong.

If court decisions do not make sense, naturally it will lead to the  litigant reasonably  suspecting their legality. In some cases the courts failed to review the legality of the administrative action, failing to mention obvious illegalities, simply saying the defendant had not infringed the litigant’s rights. .

Judge Hu and colleagues identified a number of factors causing the ongoing large number of petitioners aggrieved by administrative cases, both external and internal to the courts. The report often refers to “some courts” acting in a certain way, without quantifying the percentage–leading the careful reader to wonder whether it really means “most,” but the judges are reluctant to say so. Their analysis is summarized below.

The basic reason is that the constitutional status of the court has not been implemented. “Big government, small court” (大政府，小法院) is an undeniable fact. A court has the status of a department at the same level of government, so under this structure, it cannot be a countervailing force vis a vis the same level of government. When a court is hearing a case, the defendant county head, as deputy Party secretary  calls the court president in “for a chat.” If the status of the court in the political system is not changed, it cannot decide cases independently and the rate of petitioning about administrative cases will not go down.

Local courts have jurisdiction over most local administrative cases, but they are under the control of local government, which interferes in every aspect of the case.  The local courts make decisions that violate the law, ordinary people’s faith in the justice system declines, so many petitioning cases.

The ideal of justice for the people not implemented, because some courts, in the name of  “serving the greater situation,” stress protecting local stability but fail to protect people’s rights, issuing illegal decisions, harming the prestige of the judiciary, causing disputes between officials and ordinary people that could have been resolved through legal means to be pushed into petitioning.

Cases are bounced back and forth between courts, with no court undertaking a serious review of the case. Courts are seeking to close cases without resolving the underlying issues. With the courts as the place for resolving social disputes and amendment of the Administrative Litigation Law (expanding its jurisdiction), aggrieved litigants, holding sheafs of court decisions are petitioning higher courts, particularly the #2 Circuit Court. If the reasoning is not clear or transparent, ordinary people will just think it is “officials all protecting one another” and petition.

Litigants often not educated, do not understand the law, and insist on their view, thinking that if they make a fuss, the issue will be solved.(My former student wrote an account of her experience dealing with petitioners in the #1 Circuit Court, linked here, while the issue of litigation-related petitioners (涉诉信访) receives attention in this long academic article.)

The issues with the status of the courts in the political structure a are beyond the authority of the #2 Circuit Court,  so what Judge Hu had within his authority to do included:

Will the current judicial reforms be able to deal with some of the issues raised by the authors of this study?  Only partially, it seems.  The future change in appointment and funding, better training for and treatment of local judges should be helpful. The 2015 regulations forbidding leading official interference in court cases should, in theory, reduce local government official interference in the local courts, but more needs to happen to educate local officials to comply with the law.  Regulations issued earlier this year mandating legal counsel for Party and state organs may be helpful in the long term. It may be helpful for the #2 Circuit Court to reach out to local lawyers to advise petitioners, as the #1 Circuit Court has done, but whether local lawyers are willing to do so (on a pro-bono basis, as is true in Shenzhen), or possibly that they are concerned that they may be accused of trouble-making under new Ministry of Justice regulations remains to be seen. It is clear from the report that deep-seated attitudes towards law and ordinary people held by government officials are changing only very slowly.