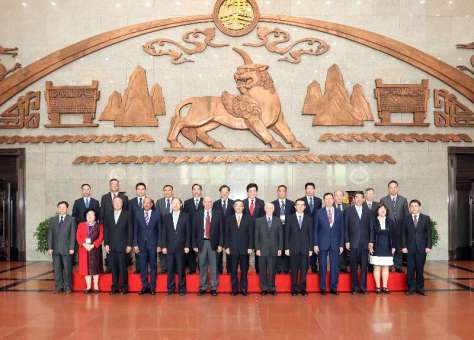 As can be seen from the above photo taken in the SPC, with President Zhou Qiang, Vice President Luo Dongchuan and others, I was among the first group of experts appointed to the CICC’s International Commercial Expert Committee. Former World Trade Organization Appellate Judge Zhang Yuejiao and I were the only two women who attended the initial meeting on 26 August.  I’ll set out some comments on the Expert Committee and the initial meeting.

The Expert Committee is the first official SPC committee that includes foreigners and others from outside of mainland China, and it may be the first of its nature within the Chinese justice (司法) system.  The Expert Committee was established as a way to involve foreigners in the CICC.  As I wrote earlier this year, unlike Singapore or Dubai, because of the restrictions of Chinese law, the CICC could not invite foreign judges to serve on the court.  Among the 32 experts appointed to the Expert Committee include many leading specialists in international arbitration and dispute resolution, including judges, arbitrators, scholars and practitioners from inside and outside China.  The detailed rules on how the CICC and the Expert Committee will operate (and interact) are still being drafted.  The provisions on the establishment of the CICC anticipate that the experts on the Expert Committee will be able to mediate disputes and provide opinions on foreign law, among other functions.

The initial meeting was held on a Sunday morning, likely to accommodate President Zhou Qiang’s schedule or that of the other senior officials who attended the meeting.  SPC  newly appointed Vice President Luo Dongchuan chaired the proceedings.  Future events will reveal his relationship, if any with the CICC.  He had previously headed the SPC’s #4 Civil Division and was most recently the head of Xinjiang’s Supervision Commission. The senior officials who attended from outside the SPC included Mr. Xu Hong, head of the Department of Treaties and Law of the Ministry of Foreign Affairs (MFA), several officials from the Department of Treaties and Law of the Ministry of Commerce (MOFCOM), as well as representatives from China’s major arbitration institutions.  A large group of officials from the SPC also attended, seated in the row behind the experts.  The CICC judges sat separately.  President Zhou Qiang presented all the experts present with their letters of appointment, followed by speeches by officials from MFA and MOFCOM, and several of the most prominent experts on the Expert Committee, including Huang Jin, President of the China University of Political Science and Law, Sir William Blair, former High Court judge and judge in charge of the Commercial  Court in London, and Rimsky Yuen, former Hong Kong Secretary for Justice.

The remaining two hours of the meeting consisted of brief presentations by some of the SPC judges involved and several experts, while other experts provided comments.  Both Judge Zhang Yuejiao and I spoke.  My brief presentation was on “the CICC: An Important Step in the Internationalization of the Chinese Courts.”  I raised a few of the legal issues that I had raised in earlier blogposts.  I concluded by reminding the attendees that the CICC could be a great opportunity to train a new generation of Chinese international judicial personnel, and that I was looking forward to the CICC giving a chance to some of my students at the Peking University School of Transnational Law to intern there!