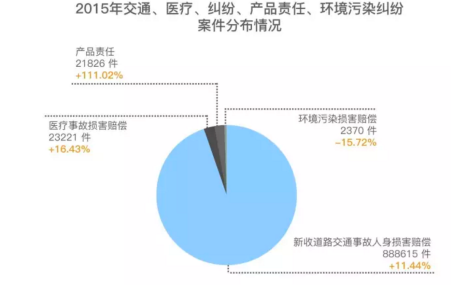 This blogpost continues the analysis of data from the SPC on civil cases–traffic accidents, medical malpractice, product liability, and environmental claims.

Traffic accident cases totalled about 889,000, up 11%.  China has a very high number of fatalities and injuries in road accidents, with road accidents a leading cause of death. Reasons that local court posit for the large number and increase in cases:

Medical malpractice cases continue to rise year on year, with this year’s increase over 16%.Law on medical malpractice is generally recognized to be inadequate.  Chinese patients (and families) are increasingly aware that litigation may result in a more favorable outcome than other methods. This may (or may not change) when regulations on the prevention and handling of medical disputes are finalized.  A draft was issued for public consultation late in 2015. The SPC participated in the drafting.  As has been reported and analyzed in a variety of publications, patients and their families often feel that the system favors medical institutions, and sometimes resort to violence, but increasingly to courts.  As mentioned last year:

The Chinese government is seeking more foreign involvement in the medical sector.  Foreign investors contemplating establishing hospitals or clinics should be aware that their tort liability is likely to expand in the near term future.

Product liability cases totalled 21, 828, up over 100%, accounting for a tiny fraction of disgruntled customers.  These can be expected to rise even further when the SPC issues public interest consumer litigation regulations, which it is now drafting.  A Shanghai lawyer recently noted that so few consumers resort to litigation because it is not worth the expense.  This is another area for counsel for foreign investors in China and those selling into China to monitor. It is unclear whether the SPC will solicit the public on its draft, as it did for environmental public interest litigation.  It is an area in which the legal committees of  foreign chambers of commerce should make their views known to the SPC.

Environmental tort claims totalled totalled 2370, down 15%, despite widespread pollution problems and efforts by the SPC: a judicial interpretation on environmental tort liability and the establishment of environmental divisions within local courts.  Reasons cited in the official media include the complexities of the cases, including proof of causation, and the lack of organizations that can provide evaluations needed by the court.  Another issue to complicate implementing China’s polluter pays principle in the increasing number of polluters that close up.