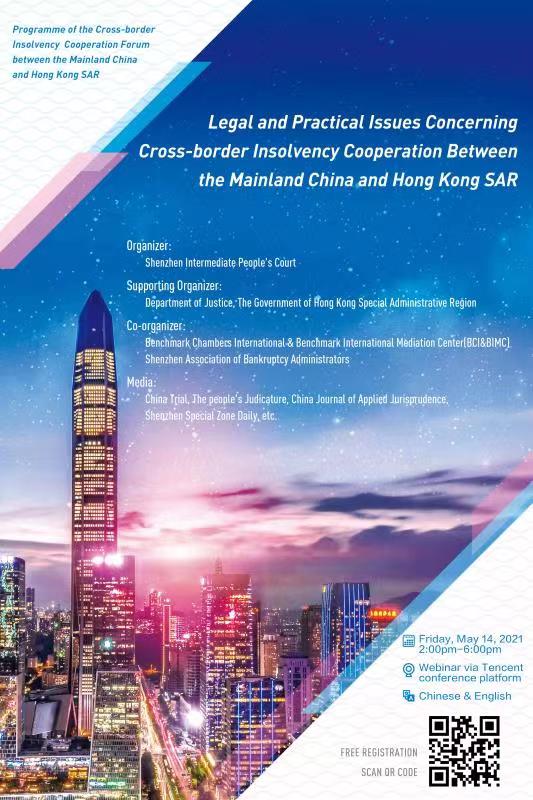 For those for whom the timing is right, tomorrow’s (14 May afternoon) event gives the interested person an opportunity to watch a discussion in real-time concerning a new hard-law legal “Arrangement”  (it is now clear that the document is not so entitled) between the Mainland (presumably the Supreme People’s Court (SPC) and the Hong Kong Special Administrative Region (Hong Kong SAR) on bankruptcy (insolvency) law and learn about relevant recent updates. The document is the Conference Summary [Meeting Minutes] on Procedures for the Mutual Recognition of and Assistance in Insolvency Procedures by the Courts of the Mainland and the Hong Kong SAR (内地与香港特别行政区法院相互认可和协助破产程序的会谈纪要).  At the same time, the SPC is releasing an Opinion approving pilot projects to implement the Conference Summary  最高人民法院关于开展认可和协助香港特别行政区破产程序试点工作的意见.  A pilot project approach is usual when the SPC wants to test whether procedures are workable before implementing them nationwide.

A  social media posting by one of Hong Kong’s leading barristers chambers describes it as the “most momentous cross-border insolvency development in a generation. ”  Although it is not so stated, I surmise (by reviewing the press conference announcing the Supplemental Arrangement Concerning Mutual Enforcement of Arbitral Awards between the Mainland and the Hong Kong Special Administrative Region” (the Supplemental Arrangement (关于内地与香港特别行政区相互执行仲裁裁决的补充安排), that the official signing of the new insolvency Arrangement will be held in the morning, after which a press conference will be held. My guess, based on that press conference, is that  SPC Vice President Yang Wanming (杨万明副院长) will sign on behalf of the SPC and that Hong Kong SAR Secretary for Justice Teresa Cheng will sign on behalf of the Hong Kong SAR Government.  The link to the SPC’s press conference indicates that Vice President Yang Wanming will in fact sign and that Judge Si Yanli will participate in the signing ceremony and the press conference.

According to the social media posting above, Mr. Justice Jonathan Harris, current Companies and Insolvency Judge of Hong Kong’s High Court, will be delivering a keynote speech during the afternoon Forum announced above.   My guess (without any factual basis) is that Judge Si Yanli will give a keynote as well.  The Arrangement is likely to have involved a great deal of hard work on the part of all involved in the drafting.

Justice Harris’s judgments contain valuable insights into some of Hong Kong’s cross-border insolvency-related issues, such as the intersection between stock exchange listings and insolvency.  His decision in the Winding-Up Proceedings of China Huiyuan Juice Group is a good example:

As I explained at the outset of this decision the court is hearing many petitions to wind-up listed companies whose businesses are in the Mainland.  Since the court resumed hearings in May more than half the petitions I have heard have involved listed companies. Remarkably petitions to wind-up Hong Kong incorporated companies operating domestic businesses are currently a minority…  What is now quite clear is that the use of the group structures I have described present difficulties.  It will be useful if I describe these and what I anticipate will be their impact for creditors and shareholders in Hong Kong and other jurisdictions….

As will be apparent from this decision the practice has developed of Mainland businesses listing in Hong Kong using corporate vehicles which have no connection with the Mainland, which is commonly the COMI [Center of Main Interest], , or Hong Kong where the business is to be listed.  The structure is made more complicated by group architecture which involves inserting between the listed company and the mainland companies at least one, and my impression is commonly more than one, intermediate subsidiary incorporated in a different offshore jurisdiction.  As this decision demonstrates this structure creates a significant barrier to steps being taken by creditors and shareholders to enforce rights using the courts of Hong Kong, which is the legal system that they have probably assumed they will be able to access if they need to take steps to enforce their legal rights against a company listed here.

As I have previously written,  cross-border bankruptcy (insolvency) law is an area of particular focus of the SPC.  Phrases in two 2020 SPC Opinions signal this Arrangement. Article 16 of the November 2020 SPC Opinion  on Providing Support and Guarantees for Shenzhen to Build Itself into a Pilot Demonstration Zone for Socialism with Chinese Characteristics (最高人民法院关于支持和保障深圳建设中国特色社会主义先行示范区的意见) states:

Promote the establishment of a cross-border bankruptcy recognition and assistance mechanism推动建立跨境破产认可与协助机制.

Additionally, Article 12 of the September 2020 SPC  Guiding Opinions on Further Expanding People’s Court Service Safeguards for Expanding the Opening Up to the World (Open Policy Guiding Opinions)) (最高人民法院关于人民法院服务保障进一步扩大对外开放的指导意见) contains the following (translation thanks to Chinalawtranslate):

Further analysis of the implications of the Arrangement will need to follow its release.