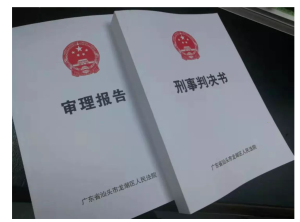 Trial report and criminal judgment, from a Shantou district court

Justice Ginsburg’s article “Workways of the United States Supreme Court” and recent correspondence with brother blogger Mark Cohen has led me to reflect on what is known (and what I know) about how cases progress through the Supreme People’s Court (SPC). It is from the small details that it is possible to obtain greater insights about a judicial system.

In discussing the sources of law (meant broadly) to which SPC judges look when considering cases,  some knowledgeable persons reminded me of the existence of something called a “trial report (审理报告 or 审查报告 (for retrial cases)).  I analogize these to bench memoranda (as used in United States appellate courts),  although the analogy is imperfect. It seems also somewhat analogous to the Votum of the German Constitutional Court, although the analogy is imperfect. Perhaps a search through Soviet (or Russian) civil procedure legislation will reveal a better counterpart.

As to what a trial report is, it is a memorandum prepared by the judge in charge of the case ( 承办人), prepared for internal discussion within the court. That internal discussion is in the first instance by the collegial panel that heard the case.  If the collegial panel feels they need greater guidance (or other related factors are relevant, such as the case being “difficult” or “important”), the trial report may be used in discussion by the specialized judges meeting or if necessary, among the documents included in the package of documents submitted to the judicial (adjudication) committee (or specialized judicial (adjudication) committee).

A search of the Chinalawinfo (北大法宝) database revealed that the same term is used for internal memoranda prepared in the course of administrative penalty proceedings and Party disciplinary and other analogous proceedings.

The outside observer is handicapped in analyzing trial reports in great detail because few examples are available to those outside the system, as explained further, with a few found in specific databases. As for the reason for the handicap, that relates to a number of regulations that keep trial memoranda confidential, some mentioned in my article on judicial transparency.  Those include:

Trial reports are mentioned in a number of SPC regulations and in documents issued by the SPC’s Judicial Reform Office. It is clearly one of the many discrete matters about which reform is being considered.

The trial report is a memorandum in which the judge in charge of the case sets out the facts of the case, evidence provided and facts determined; prior rulings or decisions in the case; issues in dispute; background information; proposed resolution of the case and rationale. The judge is not bound by the restrictions in the sources of law that may be cited, with some judges stating that the results of discussions with experts or foreign principles of law or cases are sometimes included.

Some reports I have seen have a section on “issues to explain” (需要说明的问题)–that raises non-legal factors, such as the impact of enforcement of an international arbitral award on the local economy. The rationale in the report may be more detailed than that in the judgment or ruling that is issued to the parties. As has been mentioned in earlier blogposts, only certain sources of law may be cited as the basis of a judicial ruling or judgment. The trial report apparently can take a broader approach to legal sources, which would be in keeping with the holistic approach that Chinese judges take to deciding cases. The trial report, unlike the judgment or ruling, is confidential. The SPC has issued forms of trial reports, such as this one for administrative retrials; others for first-instance administrative cases; second instance administrative cases; state compensation cases.

SPC rules of operation call for a judge‘s assistant to be responsible for preparing a draft of a trial report, with the judge in charge of the case responsible for it.  Interns may be involved in preparing a preliminary draft for the judge’s assistant to whom they are attached (as I know from my own students who have interned at the SPC). The judge’s assistant will review the intern’s draft thoroughly. There are proposals to require search of relevant prior cases, but this is something that likely is general practice at the SPC (see my article on case law).

A recent article by an experienced Chinese judge (at the local level) points out problems with the trial report system (at the local level). In his experience, since the last round of judicial reforms, most judges do not care much about drafting a trial report, in their rush to process cases on time. They, therefore, fail to provide a holistic report on the case. That complicates matters for the second instance judge reviewing the case file. Because the trial report does not describe fully the scope of factors that entered into judicial thinking, the second instance judge lacks a full understanding of the case. He says that for a Chinese judge, in addition to the facts and law, among the other factors to consider include:  judicial policy; petitioning and stability maintenance; the impact of media; the impact of the decision; interference and inquiries from either inside or outside the court; value judgments of individual judges.  In his experience, at least, the responsible second instance judge will meet face to face with the lower court judge to seek to understand the whole picture, rather than solely relying on the case file.  He points out that this practice has its drawbacks.   The author suggests using a system that he entitles “explanation of the situation regarding the decision” (裁判情况说明) rather than a trial report.

The fact that little is known about trial reports speaks to how little scholars (in China or elsewhere) focus on the details of how the Chinese legal system operates.

As to whether judges would favor making trial reports public–an unscientific sample says no. One suggestion that I have heard was that a broader approach should be taken to sources that could be cited in a judgment, so that a judge could cite to persuasive scholarly works. But what if it is revealed that judicial thinking on a particular issue has been influenced by foreign theories?  The thoughtful Chinese judge wants to be both politically and legally correct.