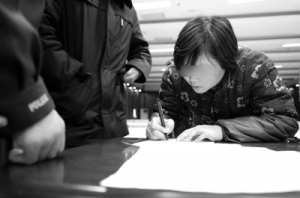 Judge Xue Shulan, Deputy Head of the #1 Criminal Division, appeared at the press conference.  The Court websites have published a number of domestic violence related articles in the past 3 weeks.  Some of these articles have been reprinted on the website of the Central Communist Party Political Legal Committee, indicating that the Court initiative has political backing.

This blogpost will briefly explain:

Some statistics about domestic violence in China

The significance of the 10 model cases 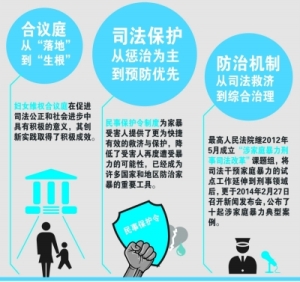 These model cases are intended to convey lessons to the lower courts, lawyers, and the general public on how to consider cases involving domestic violence.

China has adopted the concept of a civil protection order (commonly used in other jurisdictions) into its legal system (see an academic study on the issue).  The amended Civil Procedure Law provides a legal basis for the issuance of these orders (see a summary in the linked article).  The Court revealed at the February news conference that over 500 civil protection orders have been issued since 2008.

The cases convey the message that the scope of persons to be protected under domestic violence civil protection orders should be expanded to include:
These cases signal an expansion of the categories of individuals for whom orders may be issued and an expansion of the definition of relationship between victim and perpetrator. Academic studies suggest a prevalence of domestic violence against the elderly and minors in China.  Academic studies have found elder abuse occurring in approximately 35% of the populations surveyed and significant prevalence of child abuse.
Previously, the sole guidance from the Court regarding the issuance of civil protection orders had been limited to issuing them on behalf of one spouse against the other while still married or in the process of seeking a divorce.

The Court is providing guidance for judges about what can be considered evidence of domestic violence.  Examples of evidence of domestic violence in these cases include the statement of the victim, in writing, medical records, and the diary of a child and/or victim.In the past judges often did not consider the statement of the victim as evidence.  Reaffirming the evidentiary value of medical records and contemporaneous notes is also important.

In one case, the description of domestic violence was described as excessive use of house rules.  In another example, emotional harm was specifically cited as an injury caused by the violence and a fine was issued.  In another case, use of threats to control the other party was cited.
By selecting these cases, the Court is also conveying a message about the types of behavior that can be considered to be domestic violence. The Court is stressing that domestic violence is not just physical, and that it is a specific dynamic where one individual exercises power and control over the other, including using threats of violence even when there is no physical violence and considerable rule making and other methods to intimidate and emotionally and mentally harm the victim.

In one case the daughter was injured when she tried to protect the mother against her abusive father so the divorce was granted and the mother given custody.  This case conveys the message that a parent who is found to have committed domestic violence against the other parent should not have custody of the child or children who were in that household when the abuse occurred, even if the child was not directly physically targeted or harmed.  This represents a sophisticated understanding of the impact of domestic violence on children and the danger of an abusive parent.

Issues for the judicial interpretation

Judge Xue mentioned at the press conference that a draft interpretation had already been prepared, but was subject to further studies and discussions and it was hoped it would be issued in the second half of 2014.  Issues to be covered by the interpretation include:
The drafting of the interpretation was preceded by several years of field studies in 73 basic level courts.  At the press conference, the head of the Court’s Institute for Applied Jurisprudence stated that the definition of domestic violence will incorporate international practice and that the courts will work with other institutions to promote a unified approach to domestic violence.

After the domestic violence judicial interpretation is issued, widespread judicial training will be needed to ensure that judges can recognize domestic violence and issue civil protection orders to protect women, children, and the elderly.  Many press reports (as well as studies by the Institute of Applied Jurisprudence) indicate that part of the problem can be traced to local courts, police and other authorities, who do not take domestic violence seriously.

This training is especially needed in rural courts, where many abuse cases occur, but also in the military courts.   Article 33 of the Marriage Law provides that the spouse of a soldier in active service who wants a divorce needs to obtain the soldier’s consent, unless the soldier has made “grave errors” （重大过错, which according to a 2001 interpretation of the Marriage Law, includes domestic violence.  This article by a judge from a court outside of Kunming describes some of the issues.