Most people who have commented (outside of China) on Supreme People’s Court (SPC) President Zhou Qiang’s March, 2017 report (on 2016 work) to the National People’s Congress (NPC) didn’t have the patience to read (or listen) much beyond the initial section, which mentions the conviction of Zhou Shifeng as indicating that the courts are doing their part to crack down on state subversion.  It appears to be another in a series of colorless government reports.  But for those with the ability (or at least the patience) to decode this report, it provides insights into the Chinese courts, economy, and society.

The report, which went through 34 drafts, is intended to send multiple signals to multiple institutions, particularly the political leadership, in the months before the 19th Party Congress.

According to a report on how the report was drafted, the drafting group (which communicated through a Wechat group to avoid time-consuming bureaucratic procedures) faced the issue of how to summarize the work of the People’s Court in 2016 correctly.  The guidance from President Zhou on the report–it must:

Underneath these political principles, the operation of a court system with Chinese characteristics is visible.

A partial decoding of the report reveals the points listed below (to be continued in Part 2).

1. Caseload on the rise

The caseload in the Chinese courts continues to rise significantly, at the same time that headcount in the courts is being reduced.  Diversified dispute resolution (the jargon outside of China is alternative dispute resolution) is being stressed.

The statistics on the SPC’s caseload are not broken down further, but are understood to be mostly civil, commercial, and administrative.  It appears from a search of one of the case databases that not all of the SPC judgments or rulings have been published (a search of one of the judgment databases showed 6600+, and only some of the death penalty approvals). It seems also that the database does not include SPC cases such as the judicial review of certain foreign and foreign-related arbitration awards.

Although the report does not focus on the reasons for the massive increase in SPC cases, careful observation reveals the following reasons:

The report also mentioned that 29 judicial interpretations were issued (some analyzed on this blog) and that 21 guiding cases were issued.  Model cases and judicial policy documents were not separately set out, although some were listed in the appendix to the SPC report distributed to delegates.

The pie chart below sets out the statistical distribution of cases heard by the Chinese courts: 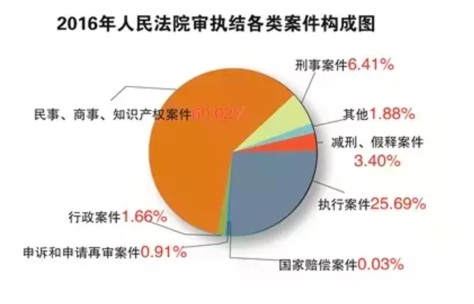 The pie chart of cases heard, enforced and closed in 2016 shows:

Although the stress in Zhou Qiang’s report is placed on law and order, in fact many more cases in the Chinese courts are civil and commercial rather than criminal.

Criminal cases have a prominent place in the report, although the data reveals a slight increase in the number of cases  (1.5%), involving the conviction of 1,220,000 people, down 1%. (Note that many minor offenses are punished by the police, with no court procedures).

Although the report mentioned the Zhou Shifeng case (state security) and criminal punishment of terrorist and cult crimes, it did not release statistics on the number of cases of any of these crimes heard.  Corruption cases totaled 45,000 cases, involving 63,000 persons.  Violent crimes (murder, robbery, theft) cases 226,000. Drug cases: 118,000, a significant decrease from 2015. 2016 cases of human trafficking and  sexual assault on women and children totaled 5335, while telecommunications fraud cases in 2016 totaled 1726.  Only 213 cases involving schoolyard bullying were heard and the SPC revealed that the drafting of a judicial interpretation on the subject is underway. The report highlighted some of the well-known criminal cases, including the insider trading case against Xu Xiang and the Kuai Bo obscenity cases to illustrate and criminal law-related judicial interpretations to signal that the courts are serving policy needs in punishing crime.

The same section described what has been done in 2016 to correct mistaken cases, highlighting the Nie Shubin case (reheard by Judge Hu Yuteng and colleagues) as an example.  The report revealed that the local courts retried only 1376 criminal petition cases, likely a tiny fraction of the criminal petitions submitted.

As President Zhou Qiang indicated, the way that the Chinese courts operate is Party/government policy-driven (they must serve the greater situation). Serving the greater situation meant, in 2016, that the Chinese courts heard 4,026,000 first instance commercial cases, a 20.3% increase year on year.  He also mentioned the 3373 bankruptcy cases analyzed in an earlier blogpost. Of those 4 million commercial cases, 1,248,000 involved securities, futures, insurance, and commercial paper and 255,000 real estate cases and 318,000 rural land disputes. Other implications are discussed below.

This section of the report devoted a paragraph to a topic discussed last year on this blog: the courts serving major government strategies, including One Belt One Road, the Yangtze River Belt, and Beijing-Tianjin-Hebei coordinated development.