Now that President Zhou Qiang’s report has been well received by National People’s Court delegates, one of the issues to which the Supreme People’s Court (SPC) has turned its attention is big data.  Recently, the SPC released a report with “big data.” The charts below are from two versions of that report.  The press release accompanying this report indicated that the SPC will release more data more periodically.The SPC has traditionally been very stingy with the release of data, and certain data that interest persons outside the court system are classified as state secrets. SPC personnel have also discussed their rationale for reviewing and releasing more data, but that will be addressed later.

Because of the large amount of data in the report, it will be reviewed in several blogposts. The two pie charts below set out out the criminal cases by type, omitting the more sensitive types and showing a drop in most types of crimes, with the exception of fraud and theft/robbery. Food and drug safety crimes are always a concern of the government, but enforcement activity or publicity about harsh criminal punishment may have had a positive effect on compliance.  New food and drug safety cases totaled 10,410件 down almost 10%, of which about 3000 involved the production and sale of poisonous or harmful food products, down almost 35%, while there were about 2300 cases of the production and sale of foods that failed safety standards, down about 2%.  The courts accepted less than 250 cases involving the illegal sale of personal information, down about 15%. Food safety issues in China affect people all over the world, as many articles of posted out.

It was clear from last year’s SPC’s guidance on drugs cases, discussed in this earlier blogpost, as well as articles in the press and reports by think tanks, that (illegal) drugs are an increasing problem.  The statistics are an indication of that: drugs cases accepted by the courts have risen 30.79% to 141,999件，Of those, almost 93,000 (92982) cases involved trafficking, sale, transport, and manufacturing of drugs, up 15.61%，illegal possession of drugs, 11104 cases, up 26.9%, providing premises for taking drugs, 36,530 cases, up 101.32%. These, at least the ones involving manufacturing, transport, and sale of drugs are relevant to the world outside of China, as the cheap production of illegal drugs has also moved to China, as articles in the Financial Times (China-made $5 insanity drug goes global) and the European press indicate.

The criminal courts accepted 26423  gambling cases, an increase of almost 32%, including about 19,000 cases of operating gambling premises, up 35%,

The criminal courts accepted 13,700 cases involving the sex trade, an increase of almost 11%, of which 11, 682 cases involved organizing prostitution businesses, providing premises, compelling women to become prostitutes, and acting as a pimp or madam, an increase of 7.4%.  Prostitution offenses themselves are generally punished outside of the courts. The pie chart above sets out newly accepted financial crimes:

The other major issue for anyone outside the Chinese court system, Chinese or foreign, reviewing SPC data is that frequently changes in classification and criteria make it difficult to understand and analyze. Or is the thinking that “a foolish consistency is the hobgoblin of little minds”? 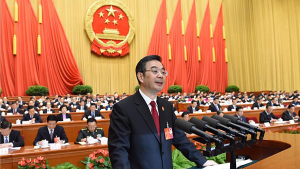 The Supreme People’s Court (SPC)’s 2015 work report has many takeaways for different audiences.  The apparently formulaic report took five months to draft, involving comments and input by many within and outside of the SPC (this article  describes the process, as did my earlier blogpost), most likely involving clearance by the Central Leading Group on Judicial Reform.  It was drafted to show certain accomplishments, send certain signals–show that judicial reform is on the right path and is successful, particularly that the court leadership and the courts are doing their part to fulfil the tasks set for them by the Party/state leadership.  This year’s report has three sections, rather than the usual two, with one section summarizing judicial reform accomplishments. This post will focus on highlights of the overview of 2015, and leave judicial reforms and tasks for this year for another day.

In a sign that the diminished attention spans have come to China, the SPC has come up with graphic and even musical versions of the report.

This short book, explaining how statistics are used to convey certain messages, was originally published in the 1950’s and translated into Chinese about 10 years ago (and given to me when I was 11 by my parents). It is a useful reference when puzzling out what SPC court statistics are saying and mean, because as this  Wall Street Journal article noted, the categories used in the annual reports often shift from year to year, making comparisons difficult, and breakdowns of specific categories are generally missing. The reason for that is the report (including the statistics) are meant to harmonize with the latest government/Party policies and be on message. The SPC is reforming judicial statistics and seeking to make better use of big data, but the fine details are not in this report.

The caseload of all levels of courts were up significantly, primarily because of the docketing reforms implemented last year (mentioned here).  Civil (family, inheritance, private lending) and commercial cases account for most of the growth.

Performance target reforms mean that judges are no longer under enormous pressure to conclude cases by year end (although some local court officials may not been on message).

The bar chart below compares 2014 and 2015 numbers for criminal, civil, commercial, administrative, and enforcement cases respectively. 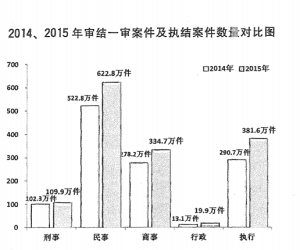 Just briefly on the criminal cases, as the overview graphic of commercial cases is linked to criminal cases-criminal cases are up by 7.5%. Significantly, criminal cases involving refusal to pay wages were up 58%, with last year’s report revealing that 753 persons were convicted, which means that 2015 convictions were close to 1200. a\Analysis of  the statistic of 1419 persons convicted of state security and terrorist crimes can be found here.

Commercial cases were up 20% (3,347,000, with 120,000 intellectual property cases (up from 110,000 in 2014).  This is likely linked to the new intellectual property courts, but I will cede further analysis on this to my fellow blogger Mark Cohen of Chinaipr.com.  Again, tiny numbers of foreign-related (6079), but up from last year (5804) and Hong Kong, Macau, and Taiwan-related cases.  Cases involving subsidiaries of foreign companies are not in this category–this is a commercial case with a foreign party. The maritime courts heard 16,000 cases, the large increase apparently also attributable to the case registration system.  The language in the speech (making headlines) about making China an international maritime judicial center reflects language in previous speeches Zhou Qiang gave in China (analyzed here), but unnoticed until the NPC report.

The SPC issued policy documents on One Belt One Road (see this analysis of its implications), the Beijing/Tianjin/Hebei area, and Yangtze River Economic Belt to implement government policies. Those strategic projects are priorities for government.

In another indication of problems with the real estate sector, Zhou Qiang mentioned “mass real estate disputes” and the expert handling by the Jinan court (in coordination with the government) of a large villa project in Jinan that encountered financial difficulties in 2008 (see this description) and led 2000 purchasers to petition in Beijing and even surround the Jinan Party Committee, Shandong Party Committee, and the Central Inspection Group that was on site. In 2014, the Shandong government decided to use “legal thinking” to involve the Jinan intermediate court.

An area for commercial lawyers to monitor is unfair competition and anti-monopoly, where the regulators are working on a stream of regulations. Last year the Chinese courts heard 1802 cases.

For environmental cases, 78,000 civil cases were concluded, along with 19,000 criminal cases.

The amendment of the Administrative Litigation Law last year, the docketing reforms, and the decision to push disputes off the streets and into the courtroom has been a large increase in administrative disputes, although the baseline was very low.  In 2015, 241,000 first instance administrative cases were accepted, up 59% from the year before, with 199,000 concluded.  Reforms have been undertaken to move administrative cases outside of the area in which they arise, which is another reason that some persons or entities have been willing to file.  The bar chart has the percentage increase in different types of administrative cases, with an 176% increase in education cases. The remaining categories (from the left are: public security, trademark, pharmaceutical, construction, transportation, energy, and the environment.

(Black & white charts from SPC work report, thanks to Josh Chin of the Wall Street Journal).