In March 2020, three Chinese lawyers filed civil lawsuits against (variously) the United States (US) government, President Trump, and other US government departments, attracting a great deal of attention on Chinese social media. The case that has attracted the most attention is the one in Wuhan, but according to Wechat articles, two different Beijing lawyers have also filed cases. Reports of these lawsuits are now making their way into English language media.

These lawsuits involve the issue of sovereign or state immunity of foreign governments, foreign embassies/consulates in China and their diplomatic staff, international institutions, and certain other persons and entities.  China’s position is absolute sovereign or state immunity– which means that states, diplomatic institutions and staff, as well as international institutions) are immune from suit and enforcement (unless they waive immunity). These issues have been discussed by practitioners and academics for quite a few years. (There have been academic discussions about China changing its position on state immunity and China has signed, but not ratified the United Nations Convention on Jurisdictional Immunities of States and Their Property, which adopts qualified immunity (not yet in force). I will not further discuss this issue as the law is quite clear.

What this blogpost will discuss is what others have not: the procedure (and the document in which the procedure is set out) by which a Chinese court decides whether to accept these cases.   This bureaucratic procedure gives greater insights into how the Chinese courts operate.

The procedure is set out in the 2007 Notice of the Supreme People’s Court on the Relevant Issues concerning the People’s Courts Acceptance of Civil Cases Involving Privileges and Immunities (the Notice) (最高人民法院关于人民法院受理涉及特权与豁免的民事案件有关问题的通知). The SPC issued the notice to the lower courts, including the military courts.

The Notice is intended to provide a clear standard to the lower courts when they encounter a case involving issues of state immunity. The system described below is one of the exceptions to the registration case filing system.

The notice itself (as I have written before about other types of judicial guidance documents) has an uncertain formal status under Chinese law, although as a practical matter it is binding on the lower courts. The core part of the notice follows:

To strictly enforce the provisions of the Civil Procedure Law of the People’s Republic of China and the relevant international conventions that China has acceded to and ensure the correct acceptance of civil cases involving privileges and immunities, this court has decided to establish a reporting system for cases involving privilege and immunity accepted by the people’s courts, and a notice is hereby issued as follows:

For a civil case filed with the people’s court where the defendant or third party is any of the following subjects that enjoys privilege or immunity in China, before deciding to accept it, the people’s court shall submit it to the higher people’s court with jurisdiction for examination; the higher people’s court agreeing on the acceptance shall submit its examination opinions to the Supreme People’s Court. Before the Supreme People’s Court makes a reply, no acceptance shall be made.) 保障正确受理涉及特权与豁免的民事案件，我院决定对人民法院受理的涉及特权与豁免的案件建立报告制度，特做如下通知：人民法院应在决定受理之前，报请本辖区高级人民法院审查；高级人民法院同意受理的，应当将其审查意见报最高人民法院。在最高人民法院答复前，一律暂不受理。

The entities listed include:

Judging by the number of page views (12,500) of the Notice in a recent Wechat article, many legal professionals (likely including judges) were unaware that the Notice existed.

The number of cases filed in China against foreign countries, diplomatic entities or persons is unknown.  One database I checked contained a case (with an English translation, that will be discussed below), and a case database has a case involving the International Red Cross, but a more litigious Chinese public means that cases likely have been filed, but I am unable to determine how many.

What does this show about the Chinese courts?

First, the Chinese courts understand there to be a single correct view on certain issues.  This is seen more widely, with references in many documents to unifying judicial approaches to issues.

More importantly, it is one small illustration of the bureaucratic, hierarchical nature and operation (官本位) of the Chinese court system.  For important issues, such as those involving the death penalty, compliance with the Convention on the Recognition and Enforcement of Foreign Arbitral Awards (New York Convention), and issues involving state immunity and the immunity of international organizations, the SPC’s view is that a high degree of control is needed. It is clear that the SPC’s understanding is that lower court judges are unlikely to be familiar with this technical but important issue.

Why is this issue important? As I wrote last year (about the China International Commercial Court), there are no small matters in foreign affairs (外事无小事)( Zhou Enlai’s saying). Both domestically and internationally, foreign-related matters, because they involve relations with other countries and the prestige of the Chinese state, are sensitive and important. 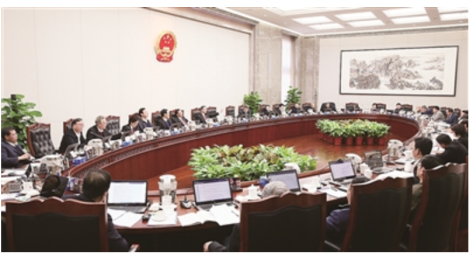 2016 meeting of SPC judicial committee, to which NPC, CPCC representatives, and certain experts were invited

On 22 September the Supreme People’s Court (SPC) updated its guidance to the lower courts on judicial committees (关于健全完善人民法院审判委员会工作机制的意见). (also translated as “adjudication committees”) (审判委员会). For those new to this blog, these committees are made up of certain senior members of a court, and they have special decision-making authority, as detailed below. They decide cases that are too difficult or important for an individual judge or judicial panel to decide, to ensure the optimal substantive result (as seen from the institutional perspective of the courts).

The document is a policy document (explained here), as indicated by its document number 法发〔2019〕20号). Lower courts (and the specialized courts) can issue further detailed guidance, have in the past and will do so.  In 2010 the SPC issued guidance on judicial committees (2010 guidance), which I analyzed in this article, Reforming-judicial-committees.  The article includes some insights from a number of judges with whom I spoke at the time.  Reforming judicial committees has been on the SPC’s agenda since the prior round of judicial reforms, as my 2014 blogpost discusses. I predicted that reform would occur “in the medium term.”  There are is a great deal of writing about judicial committees in English and especially in Chinese.  My 2014 blogpost links to some of the English language research, and other insights about how judicial committees work can be found in Embedded Courts, the prize-winning book by NG Kwai Hang and He Xin.

The broad consensus on judicial committee reform can be seen in Articles 36-39 of the Organic Law of the People’s Courts, as amended in 2018 (2018 People’s Courts Law), but the 2019 guidance sets out more detailed rules.

This blogpost will highlight some of the issues that come to mind in a quick review.

Although for many years proposals have been made to abolish the judicial committee, I have rarely heard anyone who has worked in the Chinese judicial system agree with that proposal.  It seems more likely that the SPC thinking is maintaining the judicial committee system is appropriate for China at this time, given the level of professionalism nationwide, the need to share/avoid responsibility for making difficult decisions, and the greater political environment.  This guidance appears to be designed to deal with some of the abuses of the judicial committee system, have greater (but not complete) transparency, incorporate new court institutions, and generally improve how the committees operate.